“This place is flippin’ brilliant.  It’s a great credit to the Architects for designing such a low impact treehouse.”

Built on a small plot in the centre of Dursley, this house was designed to have minimal impact on the surrounding trees and to preserve the natural habitat of the site. Featured on Grand Designs in September 2016, the Treehouse garnered much interest for its beautiful cantilevered structure, its low environmental impact and for the romanticism of living in a ‘treehouse’.

The brief for the house was to gain planning permission for this unusual site which had twice before been refused planning for conventional houses. The client wanted a dwelling that was very sensitive to both the immediate surroundings of the site and the wider, local community.

The 27 protected trees posed a big constraint and dictated the location of the building within the site. This meant that at the design conception stage the trees had to be considered in three dimensions in order to accommodate all the branches and predicted growth and Millar + Howard Workshop, together with the engineers had to think innovatively to solve the unusual implications produced by this design.

Millar + Howard Workshop wanted to design a structure that was distinct from the trees yet complimented their form, textures and patterns, a building that differed from a typical treehouse. The design plays with the cantilevering of boxes that are elevated and offset between the protected trees on the site. The house also boasts a lightweight veranda that circulates around the home and projects into the tree canopy: an unusual treehouse escape hidden in the middle of a bustling town. 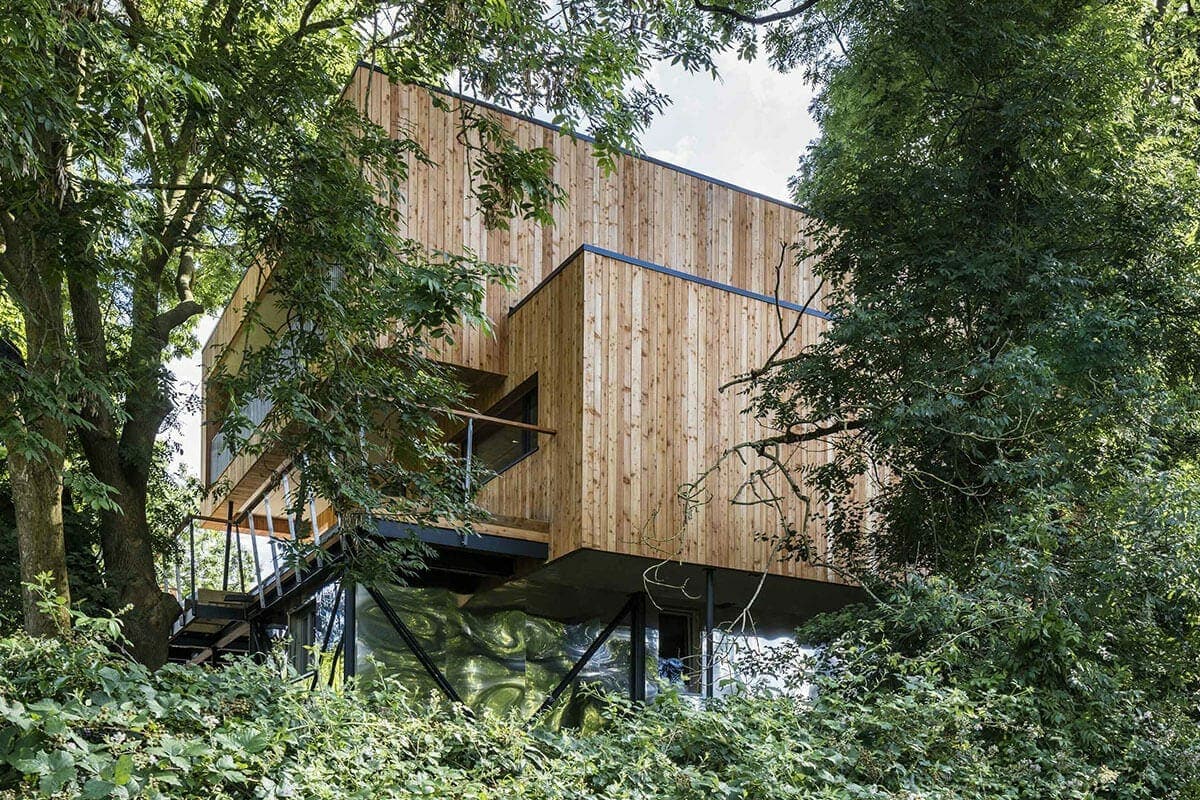 “This place is flippin’ brilliant.  It’s a great credit

to the Architects for designing such a low impact treehouse.”

A small, densely wooded plot with 27 protected trees on it

The trees posed a big constraint and dictated the location of the building within the site.

Passivhaus status is difficult for unconventionally shaped and proportioned buildings but the clients were determined to achieve it.

Two previous applications for houses had been declined

Conventional dwellings would not pass planning, a different approach was needed.

How We Met the Client’s Requirements

The trees had to be considered in three dimensions at the design conception stage and a different viewpoint was taken: we climbed up the trees and considered building a house in the spaces between the tree branches rather than on the ground.

We worked alongside specialists to ensure that certification was gained

We worked with the planning officers, listening to their concerns

Developing a relationship with the planning officer, to understand their motives and primary concerns, we worked collaboratively to seek solutions like assessing the predicted growth of the trees in order to establish the best location for the house within the site.

A treehouse carefully constructed within the remains of an old oak tree.

A wedding venue built from rammed earth at the rear of a Grade II* listed house.